Book of the Month : The Traveling Cat Chronicles by Hiro Arikawa (translated by Philip Gabriel)

The first fiction book to make it to my Book of the month! And absolutely well deserved. The Traveling Cat Chronicles is a heartwarming tale of a cat Nana who goes on a trip all around Japan with his owner, Satoru visiting his friends from different times of Satoru’s life. The story is told from the perspective of Nana and the Satoru’s old friends and through their lenses, we learn more about Satoru as a person. I absolutely love the way the story is structured and how with every page, we learn more about each character, all who are so relatable with flaws and strengths of their own.

It’s about life, friendship, the burdens we carry in life, kindness and so much more. He achieves all that while also drawing in so many elements of nature and aptly capturing the behaviours of Nana (as a cat owner, I can vouch that it’s so accurate). It really feels like you are on the journey with them and some moments just tug at my heart strings so hard *cue the waterworks. Absolutely well written and sprinkled with that Japanese simplistic charm. Highly recommended!

I think is one of the most practical finance books I’ve read. Not only is it jam packed with things to consider when Investing in Asia, detailed case studies and backgrounds of Asian companies, it’s also a great investing guide and includes interviews from Top Asian fund managers. I really liked how it’s so well structured – with a checklist and detailed but easy to understand explanations. I think this is a good book for beginners who may be overwhelmed and just don’t know where to start. The book also does draw on investing philosophies from the famous Warren Buffet and Benjamin Graham – so I see it as a one stop reference point!

The authors are really knowledgeable and it shows when they elaborate on the macro trends and how that may impact specific companies. It’s such an eye opening read and I’ve learned so much. The co-author Stanley actually used to work in Motley Fool and has a youtube channel if you prefer to learn via videos instead.

Highly recommended! With so much wisdom to digest, I believe I would continue to refer to this book when I need some reminders on how to approach my own investing strategies.

This memoir is actually a re-read for me because I had a sudden nostalgia to read books in hardcover (having read all my books using an e-book reader this year). I have read this a couple years back and thoroughly enjoyed it. Robert Kuok is a Malaysian Billionaire, one of the most famous Asian businessman. His memoir is an absolute delight to read, having grown up in the Pre-independence era of Malaysia and through World War II, we get a glimpse not only of his life experiences, but it’s like a lesson in history for Malaysians, having to see how the country has evolved economically and politically. It’s a must read for all Malaysians!

Even for non-Malaysians alike, I realised that the memoir is similar to Trevor Noah’s memoir in many ways. For one, both of their mothers heavily influenced their characters, they both had to tackle issues of poverty, race and colonialism and are both demonstrated a strength in character to turn adversity into advantage. This is an enlightening read if you are interested in how things are like in Asia. After all, he literally went to school with Malaysian’s 2nd Prime Minister and Singapore’s founding father.

I particularly admire his keen business sense; there is much to learn just by reading his thought process to business decisions and his astute observations of the way things work in the business and political landscape. It’s both a personal read and a mark of brilliance of the empire that he built. Highly recommended!

Looking for Alaska by John Green

I’ve always enjoyed John Green’s writing. I recall his bestseller – The Fault in Our Stars moved me to tears. He has a way with words which reels you in. Similarly in this book, we follow the coming-of-age story of Miles (ie. Pudge) who enrolled in a boarding school, looking for his ‘Great Perhaps’. At the school, Miles becomes part of a friend group where he meets Alaska – a stunning and impulsive girl. From pranks, tragedies to philosophical discussions about religion, it’s interesting to watch the characters develop and learn more about each other. The only reason why it’s not a 4 for me is because I felt the book took too much time setting the context, building up the characters, that I felt the ‘twist’ and reveal felt too rushed, and there were some loose ends. But overall it’s a nice summer read !

No Exit by Taylor Adams

On the way to the hospital to visit her ailing mum, Darby finds herself stuck in a rest stop in a snowstorm with 4 strangers and then she notices that there is a child kidnapped in one of the vehicles! With no line to call for help, can she figure out who the kidnapper is and save the child? Sounds like a decent plot premise right.

I thought so too. The book started off pretty strong but the more I read it, the less I enjoyed it. Maybe because it felt like it was mainly written just for the suspense of whether the main character would come out alive and successful, but her motives are not explored. We never truly know why she is feeling so heroic and even the villain itself feels like the typical bad guy with little depth. Some of the actions taken by the main character also felt kinda far-fetched. Overall a pretty fast paced thriller read but not memorable at all.

Book reviews from other months:

View all posts by Jojo_baaa 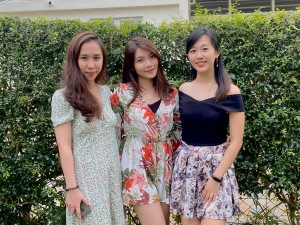 For enquiries, feel free to reach us at karen@gudeiary.com

Any use of the content without written permission of the photographer/writer is strictly prohibited.

You may obtain permission by contacting me at karen@gudeiary.com